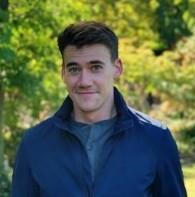 
The Marietta, GA Chapter of the Barbershop Harmony Society proudly welcomes Jonathan Riviere as the Musical Director of Big Chicken Chorus. Jonathan is a 2017 graduate of Florida State University, holding bachelors degrees in both Commercial Music and Professional Sales.

As a student in Tallahassee, FL, Jonathan began his Choral Directing career as the Musical Director of Gray Memorial United Methodist Church in 2014. He also joined the Tallahassee Chapter of BHS and assumed the responsibility of Youth Membership Chair. During his time in Tallahassee, he brought 18 new active members to the Chapter, making him the hottest recruiter in the Sunshine District!

Following his graduation from FSU, Jonathan returned to South Florida to begin his career in the tech industry. There, he assumed a position as the Director of Music at Lamb of God Episcopal / Lutheran Church in Estero, FL as well as Musical Director of the Gulf Coast Harmonizers in Fort Myers, FL. By 2019, the Gulf Coast Harmonizers had increased in size from 25 to 39 voices and placed 3rd in the highly competitive Sunshine District Chorus Contest.

A role in Google’s Digital Marketing department called Jonathan to New York City where he continued his Barbershop career as the Baritone Section Leader of the Voices of Gotham. The Voices of Gotham represented the Mid-Atlantic District at the 2019 International Convention in Salt Lake City and garnered an A-level score in the Chorus Contest. That was Jonathan’s 3rd appearance in an International Contest, including appearances in 2016 and 2018 with the Miami, FL based THX, representing the Sunshine District.

Jonathan relocated to the Atlanta area in 2022 where he is once again employed by Gartner, Inc. as an Account Executive. Jonathan and his recent bride, Madison, reside in Canton, GA where they spend their free time playing Donkey Kong and eating chicken nuggets.

Jonathan actively invites any new or past members to stop by for a rehearsal! If you are looking for a low-stress welcoming community to work on your personal singing, you are welcome here!

Sign up for our newsletter to receive the latest news and event postings.